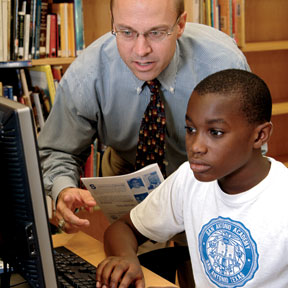 How Do You Choose The Best School For Your Child?

Sometimes, which school a child attends is a simple matter of geography: The student enrolls at the nearest public school. However, for parents seeking more of a custom fit for their child, San Antonio offers dozens of private schools.

The reasons parents seek alternatives are as varied as the choices: smaller class sizes. Incorporation of faith or values into the daily routine. A different approach to learning. Attention to special needs. Or Ivy League aspirations.

The main appeal of private schools is freedom to choose, says Bob Windham, headmaster of St. Mary’s Hall. “Parents have a wide range of choices in private or independent schools, because they can be what they need to be,” he says. “We’re truly independent.”

To choose the school that best fits a child, the first step is for parents to take an honest assessment of the child’s needs, apart from their own wishes or assumptions. In raising her three sons, Mary Burch learned to abandon her own preconceived notions about education. The reality, she says, is that parents have to consider what is best for the individual child regardless of their own entrenched beliefs about the ideal school experience. You do what’s best for the child, not necessarily what you think you would do,” Burch says. Each of Burch’s sons had a completely different educational setting.

The oldest thrived on the social dynamics of public school. The middle child found success in a smaller independent school, where there were fewer distractions and he received specialized help with attention deficit disorder.

The youngest is now a 15-year-old sophomore at Keystone School, where he started in the sixth grade after transferring from a public school. As their son was about to enter junior high, Burch and her husband thought he would do better in a smaller environment with other students who were like him — very focused on academics.

A visit to the Keystone campus, where she saw eager learners like her son, convinced her. “I looked around and thought, yeah, my son looks just like these kids!” Burch says. “It just looked right to me. I could see myself and my family here.” The school fit Burch’s family so well that she became the development director at Keystone a year after her son enrolled.

A simple way to begin sorting through the choices is to look at each school’s mission statement. This will explain why the school exists, and is a great way to find out if the school’s goals match those of you and your child. “In independent or private schools, every school picks its own mission,” says Windham.

“They can say, ‘This is who we’re going to be.’ They’re widely different.”The variables go far beyond academics. Some schools put an emphasis on spiritual or character development. Some focus on students with special needs or learning disabilities. Some are a blend of academics, fine arts or sports. Others adhere to a specific learning method, such as Montessori, or provide a same-gender setting. Some require uniforms; some don’t.

When the search has narrowed to a few schools, ask questions that will reveal each school’s philosophy, environment and day-to-day life. For example:• Check the facts. Helpful information includes class sizes, teacher-student ratios and measurements of student success, from test scores to where students go after they graduate from the school.

At Judson Montessori School, each classroom has a three-year age span. Based on Montessori teaching principles, this structure provides individualized instruction, with younger students learning by example and older students taking on leadership responsibilities.

At Incarnate Word High School, the day is broken up into 20-minute periods designed to allow students to learn time-management skills. • Learn about the teachers. How long have the teachers been with the school? What are the continuing education requirements for the faculty?

What are the credentials of the teaching staff? Are teachers certified? Certification requirements vary among private schools. However, keep in mind that some teachers who are not certified can offer considerable expertise in their field. •Visit while school is in session. At some schools, everyone who applies is required to come for a day visit. If this isn’t required, ask to do so anyway, suggests Windham. At St. Mary’s Hall, prospective students spend an entire day at the school, accompanied by a student, and parents are encouraged to take tours while school is in session.

“extras.” Besides academics, what “extras” does the school offer? A smaller school that strongly emphasizes academics might not have music or arts programs. Another school might emphasize arts or devote part of the day to religious study. Parents must know what their priorities are and what trade-offs they are willing to make.• Ask about accreditation.

Parents sometimes overlook accreditation, says Rhonda Durham, executive director of the Independent Schools Association of the Southwest (ISAS). ISAS administers an accreditation program for schools in six states, including Texas. Accreditation is a seal of approval from an organization that measures quality in schools. There are several accrediting bodies and each one uses different criteria, but despite differences, accreditation is a sign that a school adheres to certain quality standards gauged by an independent party.

“Anyone can open up an independent school and hang out a sign,” Durham says. “They may be warm, wonderful people, and it may seem like they have a great program, but you really have to go on a lot of faith if you don’t have any seal of approval that you can rely on.” Ask prospective schools about their accreditation and what it signifies.•Focus on the right reasons. Keep the child’s individual needs at the forefront of the search. Don’t make decisions based only on a school’s name or reputation, or where the child’s friends are going.

While many private school officials recommend that parents involve their child in the process, some say the parents’ role is to provide the wisdom and guidance to make the final decision — preferably with their child’s buy-in.“ A lot of parents want to allow their child to make the decision, but ultimately it should be the choice of the parent,” advises Ninfa Ozuna, director of enrollment at Incarnate Word High School.

Ozuna, a graduate of Incarnate Word High School and now the school’s director of admissions, realizes that if left up to the prospective students, some girls would be hesitant to choose an all-girls school. However, parents tend to be more receptive to Ozuna’s message that often girls can benefit from a single-gender environment, creating more class participation among female students and a higher incidence of girls excelling in traditionally male-dominated subjects such as science, math, computers and engineering.

“We hear (college) professors say, ‘I could tell she went to an all-girls school — she sat up front, raised her hand, asked questions, participated in the discussion,’” Ozuna says.

Schools for boys cite similar benefits. At San Antonio Academy, a school for pre-kindergarten through eighth grade, an all-boys environment changes the dynamics of the school, allowing boys to focus more on academics and other school values. “It’s cool to be smart here,” says Mary Wilde, director of admissions.

Any way you add up the numbers, private school is a major financial commitment. According to ISAS, a private school education can cost anywhere from $3,000 a year for preschool to as much as $20,000 for upper levels. When considering cost, factor in the price of textbooks, meals, uniforms and other costs for services or special programs; the school may include these costs in tuition or bill them separately.

Durham advises parents not to rule out a school that looks like a good fit because of cost. Investigate the possibilities — you might be surprised at what financial assistance is available, she says. Financial assistance varies from school to school, but many San Antonio school officials say they are dedicated to making it as affordable as possible. “One of the things we encourage and support is diversity of all kinds,” says Nancy Harwell, associate head of preschool and elementary at St. Luke’s Episcopal School. “We provide financial aid as much as we possibly can in order to have a diverse student population.”

If parents decide they can’t afford a full private education for their child from preschool through high school, there still may be benefits to enrolling a child in private school for at least part of his education. Preschool is tax deductible as child care for parents, so some parents will enroll their children in private preschool but start them in public school at kindergarten, says Diane Dunn, director of admissions at Buckner Fanning Christian School.

Sometimes students who have spent their elementary school years in a private school yearn for a larger public school setting for high school. Students at independent schools that instruct only through eighth grade must move on to other schools, but no matter where they go, children who spend early years in a private school take the benefits with them for the rest of their life, says Elizabeth Smith, marketing director of Judson Montessori School.

“The transition for most of them is really seamless, because I think making that investment early on in the child, they really get a sense of who they are and what they can accomplish, and that can be carried on no matter where they go,” Smith says. “The extra attention and discipline will prepare them for success no matter where they go.”

Conversely, many parents start to look at sending a child to an independent school in later grades as a boost to college preparation, seeking out smaller class sizes and more rigorous instruction. Wherever their goals and budget intersect, the reward comes from finding a school that matches the child’s unique qualities. As Durham advises, “Parents should not seek the ‘best school,’ rather the ‘best school for my child.’”